All About Cowboy Boots

Cowboy boots: classic, flashy, traditional, practical, and more than a little bit eccentric. But if you’re not actually a cowboy, can you really pull off wearing cowboy boots, or will you just look like a bit of an idiot? These boots have a long history and a wide range of styles available, but many people worry about whether or not they can really get away with wearing them. While it is true that they do require a certain sort of style to pull them off properly, cowboy boots are more versatile than you might expect at first.

What are Cowboy Boots? 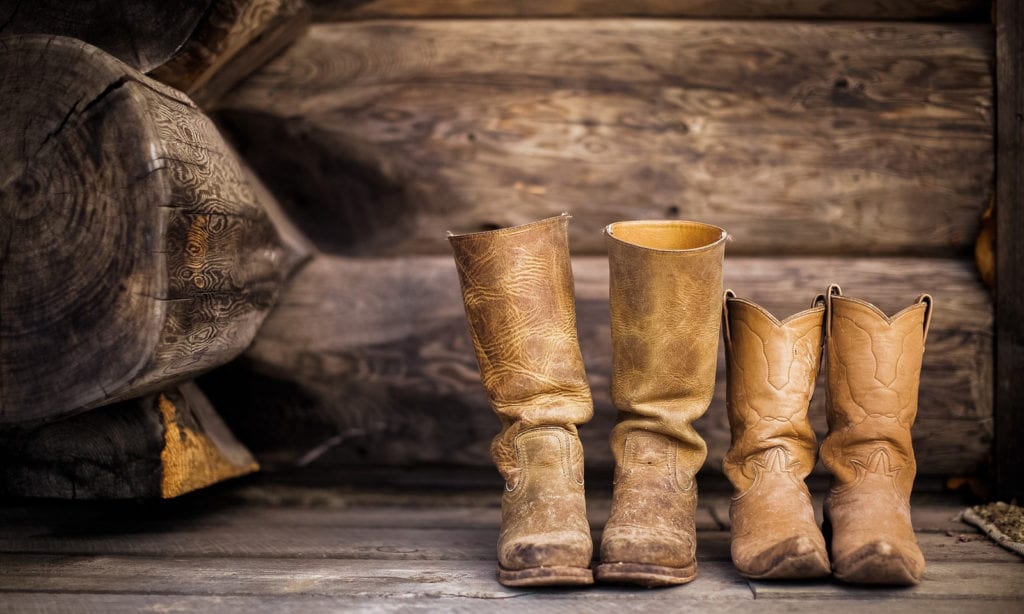 If you’ve ever seen a western movie, a picture of a cowboy, or even a rodeo, then you have seen a pair of cowboy boots. These specialized riding boots are flashy and eye-catching and closely associated with modern rodeos, ranches, the southwestern US, and classic cowboy movies.

Cowboy boots generally include a number of distinctive features: a high Cuban heel, a high shaft, and a more pointed toe than many other styles of riding boot. Cowboy boots are usually made from cowhide leather, but many other animal skins are popular – particularly snake, buffalo, and alligator. Modern cowboy boots are often made from faux leather instead, though, so that no animals are harmed in the process of making these shoes.

The most important part of a cowboy boot and the feature that separates cowboy boots from other riding boots is the Cuban heel. That’s an angled, underslung heel part with a height of at least ½ an inch. Cowboy boots with low heels are more comfortable to walk in, while larger heels offer more security when riding, as they hold your feet in place in the stirrups more effectively. Sometimes you will run into cowboy boots with a heel of up to about 2 inches in height, but most range between 1 and 1.5 inches.

Cowboy boots are always unlaced and simply pulled on and off. They often have small leather loops, known as bootstraps, to make this easier, but never laces. This is for practical reasons; laces could catch on the stirrups of a cowboy’s saddle, causing problems when falling from the horse and risking serious injury from trampling or dragging behind the horse.

The History of Cowboy Boots

Throughout history, horsemen have needed sturdy protective footwear, and have generally preferred boots with higher heels to give more security around the stirrups while riding. Modern cowboy boots have evolved from styles such as the Wellington boot, popularized by the British Duke of Wellington.

This was a simple straight topped leather boot with moderately high heels and a plain leather build. The other important predecessor is the Hessian boot, a riding boot with a V-shaped front ankle cut, and often a tassel hanging down from the front of that V.

What we think of now as being a cowboy boot was invented in Coffeyville, Kansas, in the late 19th century (probably sometime around 1870). These featured a low Cuban heel and a front (known as the “graft”) that was higher than the back of the boot.

Most Coffeyville style cowboy boots were made from black leather, but other materials were also occasionally used. These boots then evolved for the rest of the 19th century, drawing on influences from European cavalier style boots, which had higher heels and were made of higher quality leather for the most part.

Some of the other details that most people think of when they think of cowboy boots are actually much later inventions and were never actually used by cowboys. As a result of the popularity of movies and radio serials about the Wild West, cowboy boots became a popular fashion item in the 1920s and 1930s, and this led to a lot of the flashier elements of modern cowboy boots. 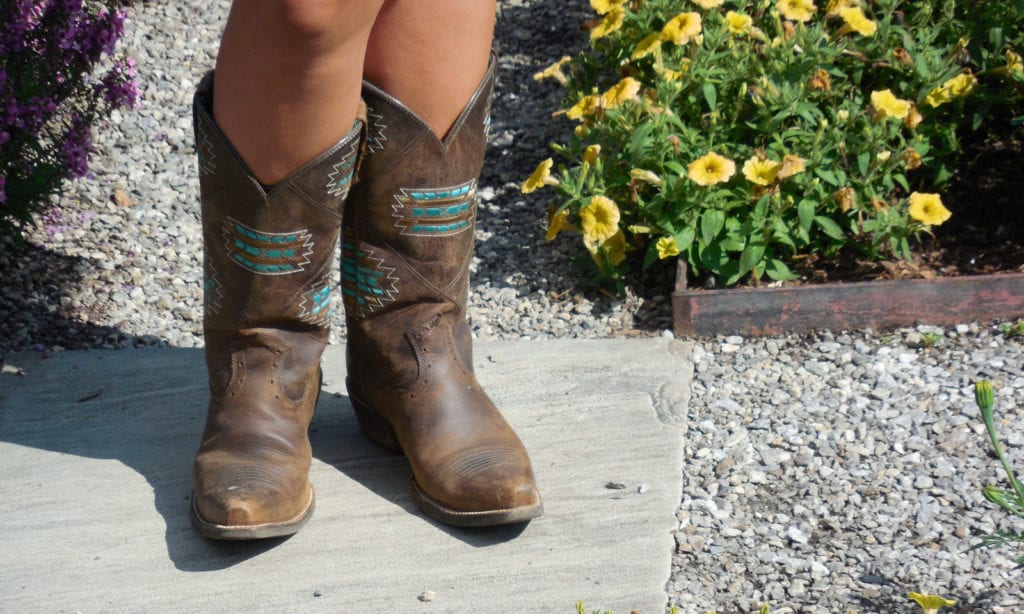 The distinctive line of stitching across the toe dates back to the early 1900s, while the detailed patterning is primarily an invention of the 1940s. The pointed toes, however, were only introduced in the 1950s, alongside another spike in popularity that corresponded with the popularization of rodeos and country music. Other, flashier elements, such as studs, rhinestones, and conchos are inventions of the 1990s and later, and are influenced by the popularity of line dancing, having nothing at all to do with cowboys!

The first and most common style of cowboy boots is the classic Western Boot, which is the standard and iconic design that probably comes to mind when you first think of cowboy boots. This style generally features a heel between 1 and 1.5 inches in height, balancing grip and stability for riding against comfort for walking. The upper of these boots is usually about 12 inches in height, reaching mid-calf height, and the toe box is sturdy enough to protect your toes from damage if stepped on by a horse.

The second type of cowboy boots is the roper boot, designed for use in calf roping for rodeo shows and competitions. These boots have low heels, at only about an inch in height, making for much easier and more comfortable walking. Roper boots have squarer and less angled heels than most cowboy boots and an upper that only reaches to just above the ankle.

Stockman boots look a lot like classic western boots but feature shorter and wider heels designed for walking rather than riding. These heels give a high level of support and balance for walking long distances but aren’t ideal for cowboys likely to ride a great deal. These generally have tall uppers with a deep scallop dip at the front, with wide toe boxes and sturdy, modern rubber soles.

Designed for practical work purposes, western work boots feature low heels and durable rubber soles for extra strength and protection. They are more utilitarian than most cowboy boots, and therefore often come in at a lower price point. The insoles of these cowboy boots are usually thicker and better padded than the insoles of other boots, offering comfort and support for intensive wearing for long periods of time.

The fifth and final type of cowboy boot is the buckaroo boot, designed to attract attention and look flashy and exciting. These are exceptionally tall boots, with upper that rise more than 14 inches and often reach the knees! They’re often covered in intricate stitching and other decoration, and feature heels of at least 2 inches in height, making them distinctive and eye-catching but much more suited for riding than for walking.

Who can wear Cowboy Boots? 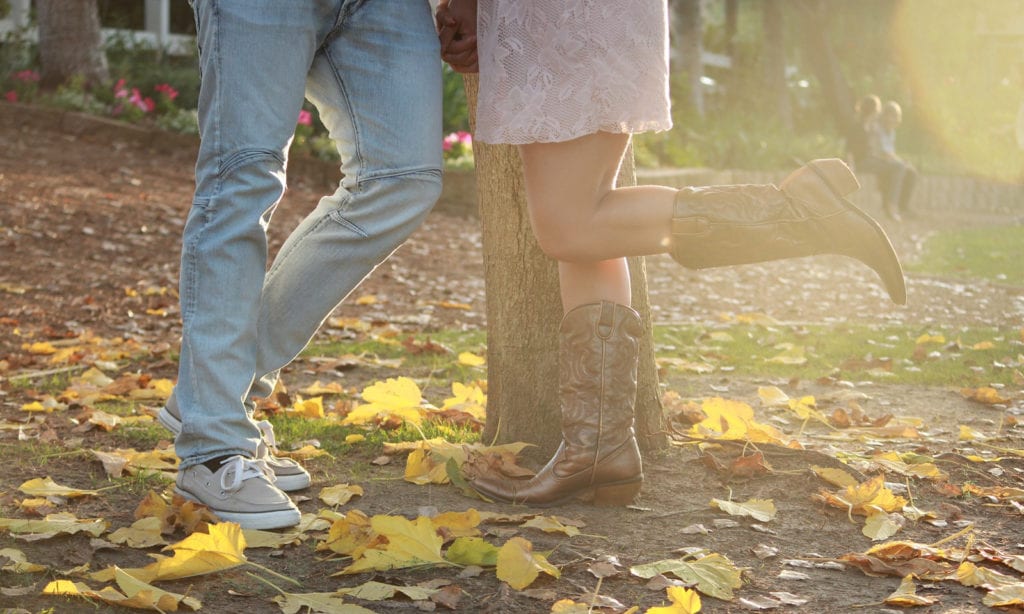 The good news is that anyone at all can wear cowboy boots! The bad news is that not everyone knows how to wear them properly. Confidence is the most important thing here, and absolutely anyone can pull them off and look great as long as they’re confident, bold, and willing to attract a bit of attention!

How to Wear Cowboy Boots?

You’re also going to want to make sure they fit properly. Poorly fitting cowboy boots can be uncomfortable and painful, and nobody wants to see a cowboy limping around and grimacing in pain. You’re going to need to get cowboy boots that are the right width as well as the right standard shoe size, and that’s something that’s easy to forget about. Women’s cowboy boots generally come in A, B and C widths, while men’s cowboy boots are available in B, D and EE widths.

It might be advisable to avoid going full cowboy in your outfit unless you’re actually a cowboy. There’s a fine line between having a bit of a flashy western edge and looking like one of the Village People! Avoiding camp is probably a good idea unless that’s precisely what you’re aiming for. It’s also worth resisting the temptation to tuck your jeans into your cowboy boots in order to show off the stitching.

Wear dark colored, close-fitting jeans in a boot cut style, and wear them over the top of your boots. There’s still going to be enough boot on display to make it clear what you’re going for, and you’ll look less campy and cartoonish. If you want to look a little sharper, try switching your jeans out for chinos or twill pants. Don’t go too far with the formality, though; cowboy boots and a business suit is not a common combination, and that’s for good reason!

In some areas of the US, you can get away with wearing an outfit known as a “western tuxedo” to formal events. This is a regular black tie tuxedo worn with a cowboy hat and polished black cowboy boots. You can’t get away with it everywhere, but if you’re in the right area, then it’s a fun and flashy twist on formal fashion.

Anyone can wear cowboy boots and look great, as long as they wear them with confidence and pride and avoid going too far with the aesthetic. Don’t feel scared of cowboy boots; if you think you might want to try wearing them, then buy a pair and give it a go! If it feels good to you, then congratulations, you’re successfully pulling off cowboy boots, no matter who you are!