Professional athletes need professional foot wear and no other foot wear is as famous as basketball shoes (see our top choices). Unlike most sporting shoes, these shoes are trendy and fashionable enough to be worn both on and off of the basket ball court. Basket ball shoes have been around for pretty much as long as the game itself.  Basketball originated in 1891 and 26 years later, the very first specifically designed basketball sports shoe came out. Converse released their first All-Star shoe and since then basket ball shoes have evolved into a multibillion dollar international business.

Shortly after Converse’s All-Star Basketball shoes hit the market, Chuck Taylor joined the company and loaned his basketball star name to the new brand in the 1920’s. It was only a matter of time before the name stuck and the popular sneakers were dubbed “Chuck Taylors” and even just plain “Chucks”. Suddenly, Converse All-Stars became the high-top sport sneaker of choice and a fashion statement to people of all walks of life.

These shoes have featured fashionably right through to the 20th Century. Nowadays, everyone owns a pair of Chucks in at least one style or colour. Chuck Taylor might have been the first player to have his name on a shoe but it was Walt “Clyde” Frazier who was the first NBA star to have a signature shoe of his own. In 1973, the sneaker company Puma, approached the New York Knicks star and offered him his very own signature shoe – “The Puma Clyde”.

When Was The First Basketball Shoe Made?

The comfy, fashionable shoes we know today as “Chucks” can be traced all the way back to 1917. These basketball shoes were the first full blooded basketball shoes ever. The first Converse All Stars were not always as colourful as what they are today. In the 1960’s, Converse All Stars were only available in two colours; black or white. It was only at the end of the decade did Converse decide to produce more colour varieties.

Basketball basically shaped sneaker history as we know it, first with Chucks and later with the Puma Clyde. The Puma Clyde sneaker was designed with suede upper and a wider sole for a better stance making it the most popular basketball shoe in the 70’s. Like many other basketball shoes of that era, the Puma Clyde eventually found its way off of the court and on to the streets.  Sadly, not many people realise the history behind these two pairs of shoes and how they shaped the way for sneakers all the way into the 20th century.

Literally every kind of basketball shoe since the very first Converse All-Stars have eventually made their way onto the feet of normal everyday people. The next generation of NBA Stars also meant the rise of a new wave of basketball shoes. Michael Jordan dominated both the basketball and the shoe world by wearing the most coveted basketball shoes of all time, the Air Jordan XI.

When Did Nike Basketball Shoes First Come Out? 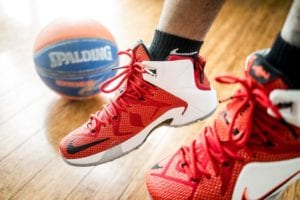 Nike released their first ever pair of basketball shoes in 1972. The Bruin and The Blazer which were both composed of leather and were the beginnings of a legacy. Nike perfected these two pairs and brought out newer versions in sued and low leather the following year. It was only in 1982, that Nike introduced the Air Force 1 basket ball shoe. By this time, Nike was gaining popularity as a sneaker brand as well as one of the main competitors in basketball shoes.

The famous Air Jordan line rose to the frontline, marketed by none other than Michael Jordan. Nike had a massive hit on their hands by integrating one of the biggest basketball players ever into their marketing strategies. All the way throughout the 90’s, Nike would continue to dominate the market by snatching up the big time players and using them to fill their signature shoes. Nike’s energetic innovation has been their driving force throughout the years and continues to do so till this day.

When Did Converse All Stars Come Out?

The Converse Rubber Shoe Company was created by Marquis Mills Converse in 1908 in Malden Massachusetts. In 1917, the ancestor of the modern day All Star was born. The shoes were first called “Non-skids” because they were mainly composed of a rubber sole and canvas upper. The shoe was designed to be a high performance athletic shoe for basketball players. The American Basketball player, Chuck Taylor joined a basketball team which was sponsored by the Converse Company.

The team was called The Converse All Stars and Taylor sold the shoes himself while teaching the fundamentals of basketball in high schools all over the country. Taylor also helped make improvements to the shoe which would make them more flexible and supportive of the player’s ankles. Thorough the years, Converse Chuck Taylor All Stars have made the shift from athletic sportswear to casual street wear and is viewed as a choice fashion item by artists and musicians.

Tree Rollins was one of the last players to wear canvas Converse All Stars in the NBA during the 1979-1980 season. Canvas Converse basketball shoes were later replaced by suede and leather versions for athletic purposes, however, the canvas version would always remain a popular choice for casual footwear.

What is a Basketball Shoe made of? 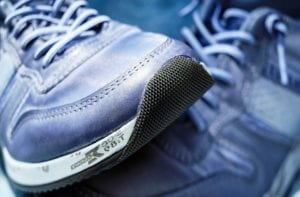 Basketball shoes come in different weights, heights and cushioning. Make sure you choosing the right type of shoe to match your strong points whether it’s speeding across the court or jumping for the hoop. Basketball shoes were once designed with all leather upper which helped to keep the foot stabilized.  The shoes also lasted a long time because of the durable leather material. The downside to leather material basketball shoes is that they are heavy and do not allow for breathability inside the shoe.

The sole of a basketball shoe is generally made of rubber material which helps with traction, grip and balance. There are different kinds of closures which are designed to hold your foot in place within the shoe. These closures are usually shoe laces or ankle straps and even a combination of both together.

Basketball shoes have come a long way since the good old Chuck Taylors and Puma Clyde’s but the main shapes have remained the same throughout history and are still with us today. Basketball shoes should feel like an extension of your own feet and not hamper your movement on the court.