Ever wonder how tennis shoes came to be, why we call them tennis shoes and when they first made their appearance. We try to answer these and more questions. The best tennis shoes can have a profound impact on your game taking it to a new level of excellence and the reasons they were invented will amaze you.

When was the First Tennis shoe Made?

The first of these types of shoes, which had rubber soles and canvas uppers were designed and manufactured during the early 18th century and designed for the British Navy to use on their slippery decks. The tennis shoe, as it were came onto the market around 1892 and were called plimsolls. These rubber soled shoes had no left or right foot and were named sneakers because they were silent when you walked, unlike the shoes of the day that had solid hard soles and made quite a noise when walking.

These shoes remained essentially the same in design from that time until around the late 1960’s when a number of different designs became popular, as different companies started to design their own versions of the tennis shoe. In fact the tennis shoe is the original athletic shoe or sneaker as we know it today, but is a far cry from the tennis shoes that you can find on the market today as these are specifically made to accommodate the tennis player, while other forms of the shoe have been developed to accommodate other sportsmen such as runners.

In 1916 the United States Rubber Company started making their own brand of tennis shoe, or rubber-soled canvas shoes, calling them Keds, and in 1917 the Converse Rubber Company came out with their version, the All-Star shoe. Even with the new brands, the style and design of the shoe changed little until the 1960’s which is when a lot of the shoe designers started to experimenting to try to improve the standard of the athletic or “tennis shoe”.

The University of Oregon coach, Bill Bowerman was a leading light here, wanting to design a more lightweight shoe that would offer a lot more traction to the user. His primary goal was to get an improved shoe that would offer more comfort to his runners with soft inner soles and using nylon instead of canvas to make them more lightweight. He named his company Nike, after the Greek goddess of victory, and the rest is history.

Adidas, Puma and other brands also got on board and started to develop the tennis shoe into the one we know today, and as the stars of the court go involved with the manufacturers the development of the humble tennis shoe started to gain momentum taking on a whole new look and feel and branching out from the sneaker from which it originated.

Where did the name Tennis shoes come From?

The definition of a tennis shoe is varied and to some they are merely sneakers by another name, however the tennis shoe, or rubber soled canvas shoe, can be traced back to the British Navy. It was here in the 1800’s that sailors on the large British fleet needed shoes that they could wear on deck to prevent them from slipping and sliding on the wet surfaces. The shoes became popular with the rich aristocrats who started using them to play a popular sport of the day, tennis, hence the name tennis shoe. 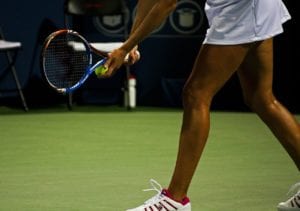 In 1839 Charles Goodyear developed vulcanized rubber, this made the rubber soles on the shoes more stable and resistant to heat, and the first athletic shoe was born.  In the 1900 the Rubber Company in the US introduced the Keds which was the first very popular shoe to be used in tennis, and in 1917 the All-Star made its appearance. Adidas made a shoe specifically for playing tennis in 1931. In the 1960 Adidas wanted to change the way people played the sport and the shoes they played it in.

They introduced leather into their uppers instead of canvas. This was a tremendous success with other companies following suite and this sparked the growth in experimentation with other materials to make tennis shoes with. In 1970 Adidas again was a forerunner launching a shoe with a Polyurethane outsole, suede on the toe and a mesh upper.  This not only made the shoe more durable and comfortable as well as breathable and was a great success for Adidas.

It was in the 1980’s that another step in the evolution of tennis shoes happened with the advent of the new Nike Air Trainer 1, which offered not only lateral support, a strap that secured the foot for the side-to-side movement you require in tennis as well as a heel lift that was a little higher than your average running shoe.

And so the modern era of tennis shoes was born and it has gone from strength to strength over the years with companies brining out more supportive, comfortable and stable tennis shoes allows players to perform better on court.

Why do we call them Tennis Shoes?

Again the reason we call them tennis shoes is that the shoes that were invented for the navy but used by the wealthy for their sports, were largely used for tennis which was a popular sport of the time. The need for a shoe that would not damage the tennis courts, along with the comfort of a soft rubber sole. This is why the soft rubber soled shoes invented for the navy to wear, were referred to as tennis shoes, or sneakers or athletic shoes.

In fact all athletic styled shoes originate from the humble tennis shoe which came into being in the early eighteenth century. Today people still refer to their sneakers as tennis shoes, although the modern tennis shoe is a far cry from the sneaker or the common athletic shoe having been developed into a shoe that specifically caters for the tennis player, helping them to perform better on the courts.

It seems incredible to think that Nike, Adidas and Puma were all born from the desire to improve the first tennis shoe. The heavy canvas, rubber-soled shoe that was invented for the British sailors to wear on deck soon became popular with the aristocrats who liked to play sports, such as tennis, and from their progressed to the tennis shoe we know today.