The first modern Olympic Games held in Athens in 1896, included Greco-Roman Wrestling but the sport goes back much further than that. Cave drawings in France which are over 15,000 years old, depict images of wrestlers in grappling stances much like those which we are familiar with in modern wrestling bouts.

With the exception of athletics, wrestling is one of the oldest sports around and was introduced to the ancient Olympics in 708BC which was shortly after the games recorded history began. Not much information is available about when exactly wrestling shoes became popular since the sport has been done barefoot since the beginning of its recorded time.

According to martial arts historian Dave Coffman, organised sport boxing predates sport wrestling by at least 150 years. The ancient Greeks wrestled long before the first boxer stepped into a ring. Since the ancient Olympics were performed naked it is safe to say that wrestling shoes are not as old as the sport itself.

Where Did Wrestling Come From? 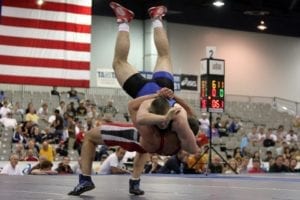 Wrestling was developed by the Ancient Greeks as a way to train soldiers in close hand to hand combat. The Romans borrowed from the Greek style of wrestling but eliminated a lot of the brutality. This lead the Greeks to fear that the true origins and history of the sport would be lost and this is how Greco-Roman wrestling was born.

For the Greeks, wrestling was a science and a divine art. It represented the most important training possible for young men. Athletes wrestled naked and their skin was coated with a layer of olive oil and sand to protect the skin form sunlight and cold weather.  After the match, this thin layer would be scraped off with an instrument called a strigil and the athletes would then wash themselves with water.

In the Middle Ages, wrestling was popular in royal houses in France, Japan and England.  During the early years of America’s development, amateur wrestling began making its appearance at county fairs and carnivals. Of the many styles that were practised only one survived the changing times; The Catch-as-catch-can method which evolved into the wrestling style used today.

Professional wrestling began in France around 1830. Wrestlers would form troupes and travel through France showing off their talent under the pretence of entertaining names such as “Edward the steel eater” and “Bonnet, the ox of the low Alps. This is very much the same as the wrestlers who appear on television today.

Up until the 1920’s, professional wrestling was viewed as a legitimate sport but this view did not endure past the 1930’s when it became identified with modern theatrics and acting. The 1980’s represented professional wrestling’s greatest period of televised entertainment. It reached widespread popularity among American youth.

The WWF became the most colourful and well-known wrestling brand to children because of the child-oriented characters and soap opera dramatised personas. Around this time, faces and heels became an integral part of wrestling and gimmicks were more popular than ever.

Professional wrestlers themselves, began to change and evolve during this golden era, however, by the late 1950’s wrestling had lost all its high ratings and producers begun to realise that they had overexposed it. This lead too many wrestling shows being dropped from television line ups.

The soap opera wrestling shows that we are familiar with today are a far cry from what wrestling was designed for. In ancient Greek, wrestling was a method of training soldiers for close hand to hand combat. This training was seen as the most important training a young man could possibly receive. Today’s wrestling matches consist more of gimmicks and trained actors than real skilled champions.

How old is Wrestling?

Apart from athletics, wrestling is one of the oldest sports. It can be dated back as far as 15,000 years ago according to cave drawings which depicted wrestlers utilizing the same grappling methods used in modern day wrestling. The ancient Greeks used wrestling to train their soldiers in close combat fighting and this was part of a young man’s journey to man hood.

It is forbidden to hold the opponent below the belt and to actively use the legs in the execution of any action. One of the most well-known Greco-Roman wrestlers is Alexander Karelin from Russia. During the Middle Ages, wrestling remained popular and enjoyed the patronage of many royal families including those of France, Japan and England.

Greek mythology celebrates the rise of Zeus as ruler of the earth after a wrestling match with his father Cronus. Hercules and Theseus were both famous for their wrestling matches against humans and beasts alike.

What Are All the Different Types of Wrestling? 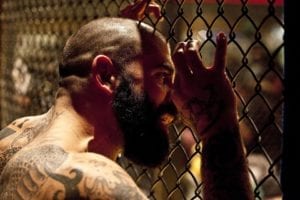 It is forbidden to hold the opponent below the belt and to actively use the legs in the execution of any action. One of the most well-known Greco-Roman wrestlers is Alexander Karelin from Russia. UWW, aka Fila is a form of beach wrestling and is done by men or women in a sand filled circle which measures 7 meters in diameter.

Beach wrestling is regarded as the oldest form of international competitive wrestling. Oil or grease wrestling gets its name from the way wrestlers douse themselves with olive oil before a match.

This is very much the same way the ancient Greeks would rub their bodies with olive oil and sand to protect themselves against the sun and cold. Sambo is a martial art form of wrestling that originated in the Soviet Union in the 20th century.

It is an acronym for “self defence without weapons” and borrows its style from the ancient Greco –Roman to the more modern freestyle judo and jujitsu wrestling styles.

Wrestling has come a long way over the years considering that this was a sport which was performed naked except for a layer of sand and olive oil coating your body. Nowadays wrestling federation’s have made a ton of money by scripting soap opera like wrestling matches which are badly acted out and overly dramatised. A far cry from the original, manly version of wrestling.